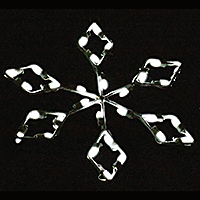 We are proud to announce that as of the 2018-2019 holiday season, all of our scenes have been converted to LEDs!

Growing each year since its modest beginnings in 2000, Cuero’s Christmas in the Park now features well over 250 lighted holiday displays, including many animated scenes!

As the celebration has expanded, so has the number of scenes that require the replacement of tens of thousands of incandescent light bulbs. Following the wrap of the 2016-2017 holiday season, the December Events Committee began the considerable effort to convert from traditional incandescent bulbs to LED bulbs. Thanks to funding from a PowerUp grant from Guadalupe Valley Electric Cooperative (GVEC) in 2017, the DEC was on schedule to complete this project within two years. Converting to LEDs has the dual benefit of conserving electricity as well as significantly reducing the need to change bulbs on a yearly basis.

Note: Beginning this year (2020), we will not have any donor sign displays, except for those displays that were newly purchased.

See also How to order a Scene »

How To Order A Scene

We take orders for new scenes following the conclusion of the holiday season, generally between mid-January and the beginning of March each year, when we receive the greatest discounts from the vendors. To order a scene, or for more information, please contact Samantha Bayfus at the Cuero Development Corporation at (361) 275-8178 or ssolis@cityofcuero.com.