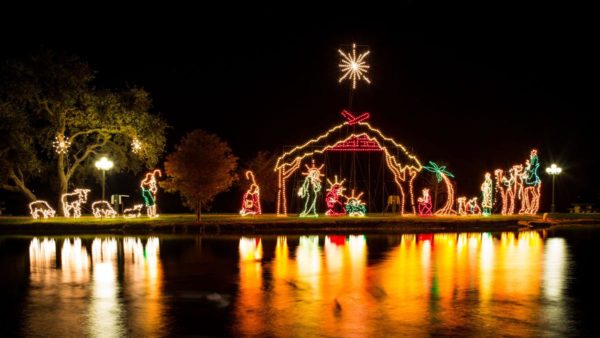 Originally published by The Victoria Advocate

For those who have yet to experience the breaker-flipping brightness of Clark Griswald’s house-lighting scene in the cult movie, “National Lampoon’s Christmas Vacation,” Christmas in the Park in Cuero is a must-see this holiday season.

Nightly from Nov. 25 through Jan. 1, Crossroads residents will break out the hot cocoa or eggnog, crank up their car heaters (when necessary, which means every other day in Texas) and head to the Cuero Municipal Park to experience the awe from 6 to 10 p.m.

Sixteen new lighted features that cost $50,000 combined will join about 300 others for the 20th anniversary of the free, self-guided, car-navigated Christmas tour of lights. Hundreds of trees and snowflakes will sparkle among the lighted scenes. And folks might want to bring their shades because last year marked the first time all of the lights were switched to brighter, more energy-efficient LED bulbs.

All of the new lighted scenes are custom-made with the exception of three catalog purchases made by the December Events Committee, an ad hoc committee of the Cuero Development Corporation. The displays are purchased early each year to take advantage of seasonal discounts that optimize the corporation’s financial resources, said Pat Kennedy, executive director of the Cuero Development Corp.

An elf elevated in a man-lift placing a star atop a Christmas tree is one of the 16 new custom-made displays that will find a place in the park this year. The 34-by-19-foot scene was donated by Energy Waste. The catalog purchases will include a 40-by-9-foot snowboarding snowman and a 15-by-15-foot elf cottage with one elf carrying a present and another holding a wreath.

Those who want to grab complimentary hot chocolate courtesy of TexasTrust Bank should make plans to attend any Thursday during December. McDonald’s, H-E-B and the DeWitt County Farm Bureau will serve the hot beverages from 7 to 9 p.m. Dec. 5, 12 and 26, respectively. Dec. 19, Joe Adams and his family will serve the hot chocolate from 6 to 10 p.m. Last year, the Adams family handed out more than 1,000 cups, Kennedy said.

Almost 100,000 visitors wend their way through the park in more than 19,000 vehicles each year. For the eighth consecutive year, Crossroads residents have voted Christmas in the Park the Victoria Advocate’s Best of the Best Holiday Event.

Next year, Kennedy hopes to replace the signage that accompanies each lighted display in the park with a keepsake book for coffee tables that lists all of the scenes and the various entities that purchased them.

Kennedy called attention to volunteers, especially the Community Squad of the Texas Department of Criminal Justice – Stevenson Unit in Cuero, in making the family tradition successful every year. The inmates work to setup the scenes throughout the park.